Posted on January 13, 2012 by cattlebaroness 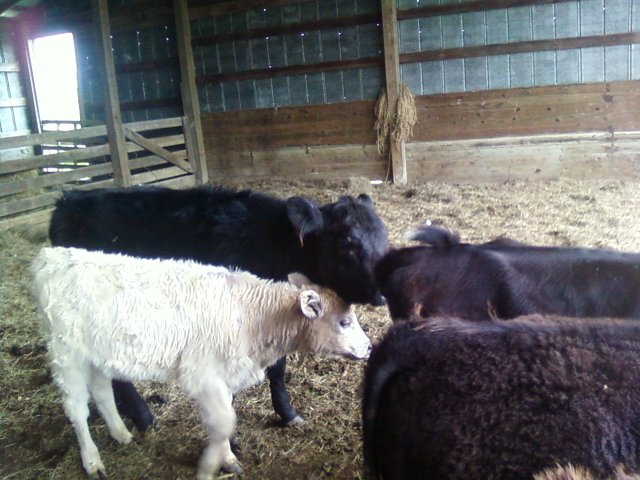 Today is a brand new day and I am feeling a little less cranky. Only a little. Thank you for understanding.

The weather turned off cold yesterday afternoon and although it is still spitting snowflakes, we only got a dusting of the white stuff. Temperatures in the teens and a good wind make things feel a lot colder than they look, but the calves are all snug in their little shed with heat lamps shining down on them. Mike said this morning (I did not go out) they got up to eat, tired of waiting and were cold, so they just laid back down and cuddled beneath the light.

We are in the process of weaning the oldest of the little babies. Boo, Runner and Cocoa have their rations cut for milk and more feed and hay. While the dry food is disappearing, their appetities for milk have not and they are the first to make a dash for the nipple buckets in the morning. Someone has shown an interest in Runner (we think he is a gurnsey cross) and plans to come out in the next few days to check him out further. That is the nice thing about selling the little ones. Little worry they will be freezer stock, at least for several more months.

We decided to try and sell our three black heifers and Rhino as a package deal. Big Mama is one of the and she may be pregnant by Rhino right now. We have not had her checked for that, but will if the new buyer requires it, I suppose. Since I don’t know much about cattle, I hesitate to make any assumptions, but she looks vigourous and healthy with good wide pelvic bones (are they called that on a heifer?) and a long body. My gut says that if she is pregnant, she will have no problem delivering. I would be more concerned about Woolie, another of the group, who is short stock, short backed, and generally smaller. I think she would mate better with a bull the size of Sam the Charolais. But, what do I know…I’m a city girl!

We have been waiting a few weeks now for word on the next “batch” of bottle babies to bring ‘home.’ Part of me wants to wait longer, so they don’t have to be transported during the cold weather, but another part of me can’t wait for the new arrivals. I am also hoping they are not Holsteins, since our luck has not been good with that breed. I don’t know whether it is the farmer not giving them the colostrum he claims, or just bad luck, but of the bottle babies, only Lil survives right now…and she is sick. Mike has had to tube her to get her milk into her for two days now.

It hurts both financially and emotionally to put so much effort into a little calf only for them to die anyway. I hope it is not the colostrum issue. If it is, my redneck training just might kick in! There is no excuse to without the only means for a calf to ‘grow’ an immune system just because you have culled him from your herd! To sell one like that, claiming they have had it, is downright fraudulent!

So, here is a word of warning for other newbies out there like me. Beware, there are crooks in the cattle industry just like everywhere. Trust those you know, verify those you don’t, and trust your basic instincts.

Off to clean house for awhile. We will talk again soon. Oh, and Happy Friday the Thirteenth!

I am a graduate of the University of Kentucky with a BA in History, nearing completion of a Master of Arts in American history. Born and raised first on military bases around the world, then in Orange County, CA, I moved to Kentucky when my children were small. I now live on a small family farm and am learning about farm life, planting and our newest addition to the landscape--cattle. Until a month or two ago, all I knew about 'cows' were that they came in brown, black and white and that some are raised for milk and others for meat. I am a quick study out of necessity.
View all posts by cattlebaroness →
This entry was posted in Cattle Baroness, cattle information, farm advocacy, humor, Kentucky, lamentations of a city girl and tagged agriculture, Bardstown Kentucky, Calf, Cattle, Charolais cattle, city-girl, Colostrum, country, cows, farming, Holstein, Kentucky, nature. Bookmark the permalink.